The population of rare and vintage guitars in Kelowna just grew by leaps and bounds, thanks to Americana Vintage Guitars, a new shop which opens its doors this week at 1295 Cannery Lane in the Arts portion of downtown.

Bear in mind these are not re-issues produced by the parent guitar companies, but, rather, the genuine instruments - some going back into the 1930s.

À lot of our guitars are in original condtion so that adds to the rarity,`explained 19-year-old Jackson Cook whose parents Dale and Tracy, along with sister Madison, are owners and operators of the shop. Though the Cooks are originally from Kelowna, the family did previously own a vintage guitar shop in Palm Desert, California though rare and vintage instruments such as those in the local shop are slightly more common in there, than they may be in this part of the world.

While collecting vintage guitars was once a passtime  for Dale, the affinity for wood, wire and fretboards runs deep in the Kelowna family nowadays.

`My dad has been collecting since before I was born,`said the younger Cook. "Now we're like Indiana Jones, we're always treasure hunting (for new instruments)".

Among their most coveted instruments is a 1957 Les Paul "TV special" which was actually developed by Gibson back then to show up well under the bright lights and dim cameras of black and white television broadcasts.

"They developed this color so it would show up best on black and white television," Cook explained.

Another of the rarities is a 1968 Gibson J200 - a jumbo western style with 'mustache' bridge, played by the likes of Sheryl Crow. 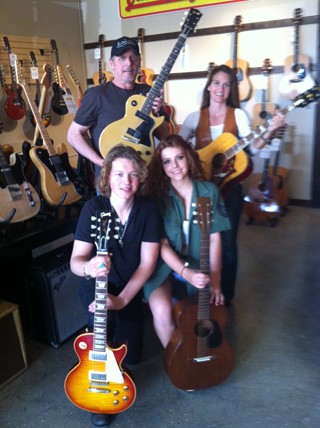 "It's still in shipping condition - no fades, no chips," said Cook. "We have such a high standard of quality and quantity."

Another gem and Jackson`s personal favourite is a very rare, 1937 Epiphone Electra model that was among the very first electrics to be manufactured and it`s in pristine, playable condition still.

Although they tend to deal in vintage guitars with a selling price point - as in not too expensive, they have the ways and means and connections to come up with virtually any vintage or rare instrument a buyer may be looking for.

"If there's a person with the means and funds, we can find any guitar for them," said Cook.

The shop also sells some new instruments, but it also deals with vintage and rare amplifiers. For instance on display is a 1940s vintage Gibson amp - a combination amp and speaker cabinet that resembles a suitcase. Then too there are much-sought-after amps such as the Fender 'tweed' and the tweed at Americana is one of a rare, special edition model that comes with four 10-inch speakers in the cabinet, rather than the standard two 12-inch ones, making it that much more special.

``The amps that we have we try to make sure are one-offs,`said the teen.